The very first machine type Bocca della Verita was made by us in 1987 and was put in Rome in the Luneur amusement Park, and was bought by Luciano Preziotti. It was in the shape of a temple and the bocca face was sculptured by artist Armando Tamagnini, for sure that was the best replica of the real one. Massimo Portolani and Alessandro Novaga recorded, together, the original voice for this machine using a Roland sampler and an Eprog-1 eprom programmer. It was built in placeby Massimo Portolani and Maurizio Tolfa, in june 1987. The following year, 1988, we presented at the Fiera di Milano the first coin operated version, that was a prototype version of the Bocca Video.

in the last 30 years we have designed and manufactured many versions of the Bocca della verità machine, of different sizes and prices. The Bocca Maxima is the one we deliver right now. In 2017 we have made a special version for Aelia Duty-free, installed in terminal E of Rome Leonardo da Vinci airport. This Bocca della verità, that we call Bocca Vera, is a real size replica, that prints discount vouchers. We can make similar big machines, on request. 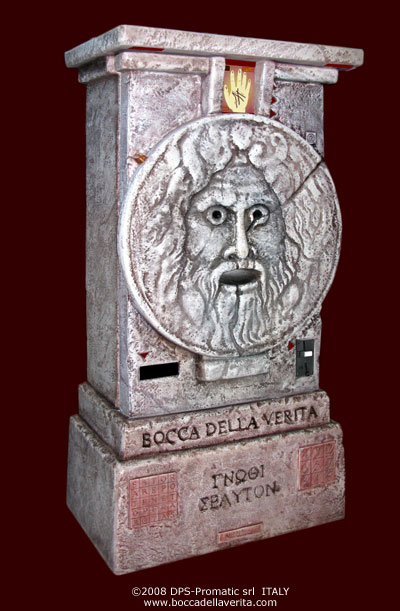 Bocca della Verità with a cabinet, ready to be installed in any place, like any ordinary machine. It is 190 cm high and 110 cm wide. It prints a ticket in thermal paper with a fortune, that can be adapted to promotions and events. We also have a version that prints on A4 paper. 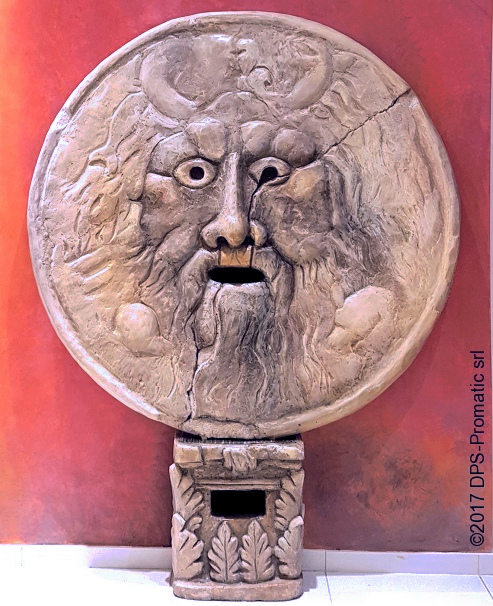 A real size (170 cm) replica of the Bocca della Verità. It is made of glass fiber (we can also use ther materials) and prints a ticket with a fortune that can be changed to meet events or promotions. Ideal for great locations. Guaranteed to attract customers. A machine made of concrete, of this size, has been installed in AELIA shop in Fiumicino airport, terminal 3, in Rome. A mini version of the Bocca della Verità Machine, 80 cm wide and 94 cm high, to be hanged to a wall. It prints a ticket on thermal paper. Ideal for places with little space available. Still very attractive.

Facts and history about the real Bocca della Verità